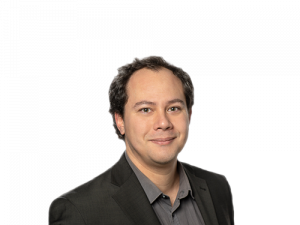 Welcome to our informal interview series with visitors to the research group. It is called Tea in TiP because interviewees are invited to share a cup of tea (though we shared some coffee on this  occasion) and talk about what they hope to work on while visiting ITU and TiP.

Nikolaus Pöchhacker is visiting from TU Munich, where he is a PhD student and part of the Munich Center for Technology in Society (MCTS). He is staying at TiP in January 2020.

Lara Reime: Welcome to TiP! What questions, problems, issues are you working on while you are here?

Nikolaus Pöchhacker: In my dissertation, I am looking at the question, how we can understand algorithms as a social phenomenon and how does it change the ways institutions are working. Also very on the intersection of STS, sociology and media theory. And right now I am working on the materiality of algorithms, it is one chapter of my thesis. The chapter is about the different ideas of what an algorithm is. For example in media theory Manovich said, we all have to become programmers to understand what this really is doing because it is a transformative force. Or going back to Friedrich Kittler, which is the Berlin school of Media theory, which was really influential, saying there isn’t even any kind of software at all because it is all in the hardware. And then we have other positions saying it is a bit more indifferent, we shouldn’t even look for the technology itself. The question is, how do we create meaning out of that. What meaning do we attach to the notion of the algorithm? The chapter explores the way, based on empirical fieldwork, how the algorithm got to exist in a software development project and what resources did they got in order to make the algorithm an actual actor. So, John Law was saying that reality is always the result of many formations, so that is the approach that I am taking there.

Lara: You started your education with a Bachelors in Sociology, so how did you ended up working on algorithm and in the whole STS area?

Nikolaus: Actually, it started earlier, because I did a technical high school. In Austria there is the thing, where you get trained for a specific job at a high school level and I was doing an IT high school and ended up working as an IT professional, as a database administrator, systems programmer and web developer. And at some point, I got a bit bored with my job and the question came up: okay we have all those technologies with all this algorithmization and digitalization, questions of surveillance and power are becoming more prevalent. And it was quite a big discussion in computer science and the hacker community back then. I was then, actually I was saying I want to study anyhow and then I was just going through the website of the University of Vienna and browsing all the different subjects and asking myself the question, and I was still young, so basically I was asking why are people buying the surveillance and security narrative [laughs]. And then I looked through the different disciplines and ask myself can this actually answer my questions and then I ended up with sociology and started my sociology bachelors. And throughout my bachelors I was always interested in how technologies are shaping societies. And then they told me, we are not doing this here, at this institute. But if you are interested you should go to the department of Professor Felt and this is how I ended up in STS.

Lara: How did you came here to TiP, to ITU?

Nikolaus: That’s also quite an interesting story. Because Gernot Rieder and Judith Simon have been here. And as Austrians they both have connections to the Austrian STS community, so at least Gernot I knew personally, so I was aware that there was something going on at ITU. And then at the Lancaster conference in 2018, Baki was my mentor and we discussed and realized that we are actually interested in quite similar things. And then he asked me if I want to come to ITU as a visiting researcher and I said yes.

Nikolaus: Yes, in between I would have wanted to come but I didn’t have time. But then I thought I am still in the process of finishing up and need some time and space, so I asked if TiP can provide me some shelter. And a third link is actually, at the moment I am co-editing a book with Nina Witjes and Geoffrey Bowker from California, where Rachel is also contributing. She is writing a chapter with Masha and they have been helping us a lot with the visual vignettes in the book. So that is the other connection I have here, so reflecting on that, it is quite interesting.

Lara: Since you are in the last phase of your PhD and soon finished, what would you like to work with in the future? In which ways will you continue your work?

Nikolaus: Continuing what I did so far, like how are machine learning and algorithms changing institutional set ups but looking at this within a legal system. There is this interesting case in the US, where they use machine learning to calculate the recidivism risk of people and based on that decide on probation, no probation or how long they should go to jail. And that is quite interesting, because in my opinion that changes a lot how the legal system works.

Lara: Before you have already mentioned your fieldwork, so let’s go back there. What was the surprising thing during your fieldwork?

Nikolaus: That’s a hard question. Now I have to think in a way that I don’t compromise anyone. But what was really interesting, so basically the whole thing started as a rather small development project and then it transformed into an organizational project, reorganizing the whole institution. And the most surprising thing that I saw, was that everyone was super hyped about the implementation of the algorithm, everybody thought it was a great idea and they need to do this, and this is super important. But the forces keeping everything in track as it was were so strong that they wanted to do it but they had a really hard time doing it. Which is really counterintuitive because very often, especially in Germany and Austria, there is this narrative that people don’t want new technology, they are skeptical about that. Which was actually not the case. Going back thinking about that, I mean there were a lot of things that surprised me, but that was interesting. They are really fond of technology and they really want to do new stuff but a lot of arrangements are holding them back.

Lara: You were expecting a little bit more reflection and hesitation?

Nikolaus: Exactly, I mean I get all the critical comments at conferences and people ask me like: why did they want to implement this software in the first place? That was never a question that occurred in the field. They never reflected on the why, they just wanted it. So a very Silicon Valley spirit in a very German, bureaucratic way.

Lara: What do you think is the coolest thing about your research?

Nikolaus: I think the coolest thing in my research for myself is, what I really enjoy that I get to see all the technical stuff that I was so fascinated with, when I started my technical education. But I am not the person that has to make it work actually. I can just stand there and understand the principle and then do the classical STS thing and deconstruct and see what does that actually mean, how does that interfere with other processes and I am not being the poor person sitting in front of the computer at 11 pm with too much coffee asking why it doesn’t work.

Lara: Now you have been here for like a month, so you might have had some encounters with Danish traditions. But what, if you had any, what is your favorite Danish food and if you didn’t then what’s your favorite place in Copenhagen?

Nikolaus: I know there is this famous Danish pastry, but I didn’t had too much of that. When I was doing this very classic touristy sightseeing stuff, I had a Danish hot dog, which are very different from hot dogs in every other place. And in my mind ingrained there is this connection to festivals, because that’s the food you get on festivals. And when I was eating it, I was just thinking back of the experiences there. So, if you ever been to festivals, I would recommend to get such a hot dog. And my favorite place… I haven’t seen so much of the city actually, but what I really enjoyed in my very limited exploration of Copenhagen, is how the universities are actually organized. Not only ITU but also University of Copenhagen, because there are so many places where you can just sit by yourself or with others and discuss and it’s this very open spirit. When you look for example at German or Austrian Universities, you don’t have that. And that is very valuable, and this open space is quite cool. And second favorite place is the book store (Academic books at KU), I just walked there yesterday in my coffee break. Because I am using Austin’s speech act theory in my chapter and then I was stumbling across the book and thought I could take that and then I was stumbling across a book about social epistemologies and thought that was interesting as well. So never sent me in a book store with my credit card.

Lara: What is the best thing about being in TiP?

Nikolaus: Myself being socialized as a sociologist, what I can say is that being here… you used to have the attitude of being afraid of anthropologists [laughs]. Just an example, what sociology understands of ethnography is very different from what an anthropologist understands, and there is a lot of fighting going on. And I think the very specific and interesting thing that is going on here, it is not so much about disciplinary boundaries. It is about having a good argument, having interesting topics and everybody is very helpful providing new angles. And that is quite interesting, this openness. Not saying: but you have to read that! But saying: that is interesting, couldn’t you expand your argument a little bit further. So, thinking with you, not thinking against you. And what I recognized very soon, there is the desk which the PhD thesis of all the members of TiP. So being so open and saying: this is how we did it, giving some guidance and also taking away the fear of writing such a big book. That is a really good institution. And of course, also the Shut up and write. I will definitely copy that when I come back home. All in all it has been a really cool and interesting experience.