Women on the agenda

With around 200 debates, workshops and talks asking for “a human response to tech”, and themes spanning from “Democracy”, “Coding”, “Ethics”, “Inclusion”, “Digital wellness” to “Females in tech”, the Techfestival in Copenhagen 2018 attempted to encourage dialogue leading to a “human response to tech progress”. Seeking a ‘human response to technological development’, the Danish think tank ATV, The Danish Academy of Technical Sciences, organized a panel on how to to expand the pool of female talent in the STEM (science, technology, engineering and mathematics) industries and educational programs. The interest comes from the top: Lia Lefland, the academy director of ATV, argues that it is only by talking about the absence of women in STEM that we can begin to break down the wall to “male disciplines” and support the training of newly qualified employees within these industries.

Professor in TiP, Brit Ross Winthereik was invited as a panel member in the debate along with 3 other female panel members: Annette Stausholm from IBM, Director Conni Simonson, Head of the Engineering Department at Aarhus Universitet and Eva Fog, founder of DigiPippi, an NGO facilitating technology workshops aimed at girls in secondary school. 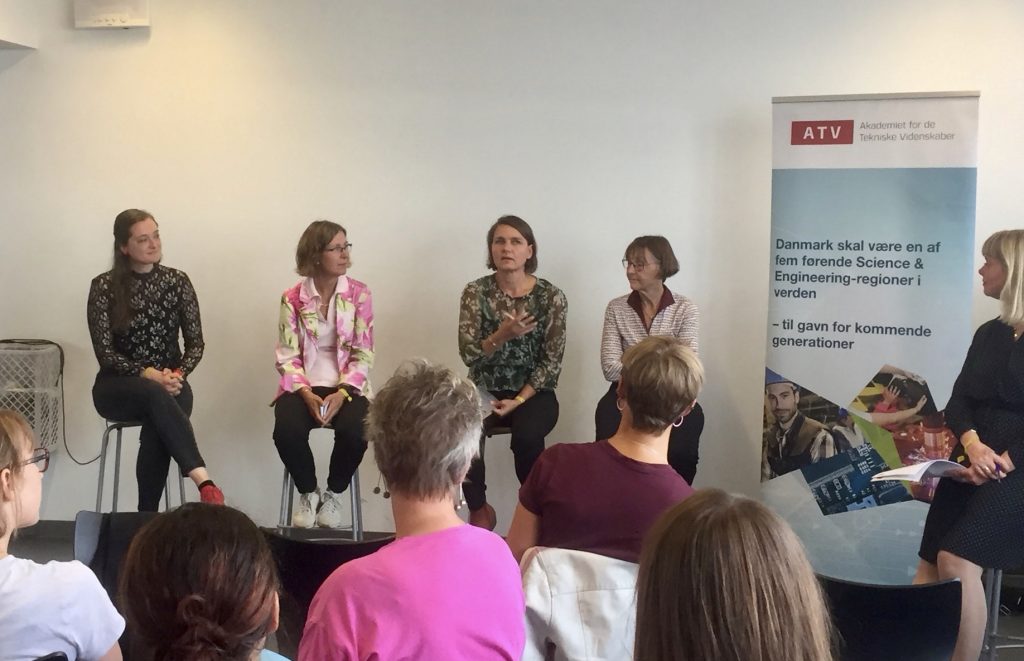 Stereotypes and subtle mechanisms of inclusion and exclusion

During the debate, the all-female panel agreed on the influence of negative stereotypes when it comes to what female and male students select as an academic field. The panelists suggested changes to the study climate to be more welcoming towards female students, revisiting common assumptions of what it means to be a nerd, and highlighting the role that families’, friends’ and teachers’ expectations have on what it is perceived that girls do best. Conni Simonsen from the Engineering Department in Aarhus argued sharing good stories about females in STEM disciplines can make all the difference. Simonsen argued that success stories broaden perspectives on who can study the “abstract, nerdy stuff”. Some in the audience also pointed to the importance of female role models at school, at university, in the workplace etc., and what kind of professional climate the students advance to – what is the gender balance where they will work?

The panel members and the audience were all interested in changing dominant narratives break down the barriers that lead to inequality. However, focusing on changing the stories about what “girls are good at” might not be the only way to get a more diverse student body into STEM programs.

TiP’s Brit Winthereik pointed out that the challenge is not only attracting female students to STEM but also retaining them. As part of her presentation she pointed to the subtle mechanisms of inclusion and exclusion that lead to students leaving STEM fields. These included things that might not seem obvious, such as a lack of gender balance in the curriculum and teaching: Who authors texts on the reading lists? What is the gender of the teacher and the teaching assistants? Moreover, how does the teacher relate to and communicate gender in teaching?

Moreover, continually representing STEM programs as male disciplines, and refering to girls as being less interested in science and IT, might keep some of these unwanted structures more in place than intended, as the choice of words shape our understanding of the world, as Brit Winthereik has pointed out.

How well do you code?

Research has already showed the social and cultural barriers to female participation. In 2018, ITU’s diversity consultant Valeria Borsotti conducted an empirical investigation into the main socio-cultural barriers to female participation in the bachelor programme Software Development at ITU. She points to how that other studies have found that female students at software development start university with less programming experience than their male counterparts. At the ITU, the Communications Department has been a driving force in putting programming experience on the agenda before university. By adding competences to the mix, young people’s choice of education also becomes a matter of experience and getting offered a helping hand by someone who can introduce girls and boys to IT. One example is the Coding Cafés for female high school students which is part of the IT University’s strategy to get more female students to ITU.

Techfest is a space to explore human responses to technology, questions that sit at the heart of democratic engagements with deep seated change. As the Techfest sessions on the politics of technology also demonstrated,  the need for diverse STEM educated candidates is also a political responsibility. At the ITU, as of 2018, the software development program at the ITU turned down 49% of the first priority applicants. Mette Fjord Sørensen, head of research, higher education and diversity at Dansk Industri, has used public platforms such as Politiken to point to the need to increase the number of students getting accepted to STEM programmes. As the ATV panel drew to a close, participants expressed the hope that by the 2019 festival, steps large and small will have been taken to begin changing dominant narratives, leading to stronger diversity and gender equality in all spheres of technological development.