John Law has recently retired from the Open University and was visiting TiP for five months between August 2014 and February 2015. During our Tea in TiP interview, we talked about his ongoing research interests and fieldwork, and what he was working on whilst at ITU.

Rachel Douglas-Jones: Hi John, thanks for finding the time for this. Can you tell me about what you’ve been working on during your time with us?

John Law: I have been working on three large things. I have a continuing interest in 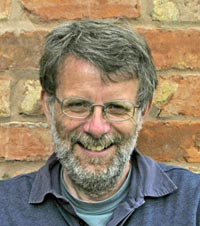 method and how it works, the perfomativity of methods and more generally of practice. That informs everything I do. But I always work empirically, on materials of two kinds. One is to do with aquaculture salmon farming, nature and culture and in 2012 I completed fieldwork of a large project on salmon farming, with Marianne Lien of Oslo University and we’re both still working on those materials. We’re also both doing further research, see here.

What underpins that, aside from an interest in fish and aquaculture, is an interest in what we code up as nature and culture get done in different modes and the difficulties of those kinds of binaries.

So the third thing relates to the second set of things, on postcoloniality. I’ve worked with Wen-yuan Lin, who is in Taiwan, on what we call “provincializing STS”. Our empirical focus in that work has been on the practices of Chinese medicine as currently done in Taiwan, and STS understanding of those, and what would happen if we used a “Chinese” way of understanding those materials. I’m hoping to do work which overlaps these two concerns with Sami people in Finnmark (Norway).

John: I travelled to Norway a couple of times during the visit and talk about salmon and nature and culture. Not that the Sami call nature “nature”. That is work that I hope is starting, because the idea of provincializing knowing, or STS, is a postcolonial enquiry, to ask what happens if we start to take seriously the ways in which other cultures, non-western cultures know and enact the world. If we take that seriously we can’t just use our own frameworks or ways of knowing to understand them. It implies there will be other ways of knowing and other forms of knowledge. Great interest to anthropologists!

Rachel. Certainly. Can you tell me more about how you’re thinking about this ‘provincializing’?

The term ‘provincializing’ is a gesture in direction of Chakrabarthy, and his book “Provincializing Europe”, in which he – as a British trained, Indian historian – asks himself how to think about events and issues in Indian history. Because they have been read, and people like him have read them, in a western way. So the presenting symptom for him, he presents it in various ways, is what to make of beliefs that appear to be absurd or wrong. He describes a rebellion the British put down with major loss of life, in which the people who were rebelling against armed troops carried on coming forward and still getting slaughtered. And when they asked survivors of this event why they did it, they said their God had told them to and they would be protected. From a British military point of view this was nonsense, from a Western intellectual point of view, it looks wrong. We tend to say, “our ideas are true, or correspond to reality and if their ideas differ from ours, then they’re wrong or mistaken”. If we’re liberal we allow they have beliefs but still tend to think they are wrong. Chakrabarthy is asking “What would I do if I took at face value – their claim that their God told them to fight – what kind of a shift would this imply in historiography?” That is the task Wang Yuan and I have set ourselves in the context of STS. So yes its about cutting STS down to size, in the sense that although many are conversant with the moves that say all knowledge is contextual, many of are happy with that, nonetheless we still do our STS. So what happens if we take our STS, move it to Taiwan, and then ask ourselves: what would happen if we took the categories and ways of knowing, the realities of Chinese medicine and used them to inflect STS, to generate some kind of ‘Chinese STS’? In the paper in Social Studies of Science we think through what we do in Eduardo Viveiros de Castro’s terms of “controlled equivocation”,

Rachel: How did your visit to ITU come about?

John: I was invited by Brit to be part of the Velux Fonden’s visiting professor scheme. Collectively TiP have really interesting STS presence so it was an attractive possibility. It has been fun and interesting talking to people and learning about projects and concerns here. I have been particularly interested in the question [raised this semester in TiP’s weekly STS Salon seminars] of what it is to be critical in the social sciences. There are questions about what has been done before – each generation enacts its differences and its own novelty in relation to the previous generation. The squarking of the ancestors is “you didn’t read us properly, or at all” but that doesn’t capture it. I think of a division between overt critique – Marxist, political economy, feminist, gendering, ethnicity, colonialism, on the one hand and a more Foucauldian informed way of thinking that explores the crevices within institutions or discourses and looks to detect differences and then ask what it can do with differences; how it can work to reframe things so those differences work differently. That’s a caricature of the modes, they are not mutually exclusive, but one goes back to Marx, another to Foucault. A lot of STS perhaps doesn’t do either, though the tactics and politics are different for the two.

Rachel: Have you had a chance to take part in much Danish STS in addition to TiP?

John: Yes, I visited Aarhus to visit people on the AURA project 3 or 4 times, Anna Tsing and Heather Swanson. I think what they’re doing is really interesting. I have also been going to the Centre for Advanced study in Oslo, as part of a project called ‘Arctic Domestication in the era of the Anthropocene‘ – an interdisciplinary collection of people from Anthropology, STS, archaeology.

Rachel: It seems you have quite extensive Scandinavian networks?

John: I’ve worked with Norwegians for over twenty years, some of my best intellectual friends are base in Oslo. The purpose of this project in Oslo right now is to undo the grand narrative, the grand, teleological narrative of human evolution and the notion of the agricultural revolution and domestication and the linearity of those kinds of grand narratives and look instead at specificities, look at human-plant relations and generally mess up the large teleological story.

Rachel: Thank you so much for taking part in our Tea in TiP Series, Joh. Any last reflections on your visit with us?

John: It’s been fun and interesting – a really nice bunch of people who are doing really interesting things in an interesting interdisciplinary manner- I think TiP is on the STS map, no doubt on other maps as well, but it’s fun and having been here I can understand why.

To read examples of the work John talks about in this interview, see here.