Estrid Sørensen is a Professor at the Ruhr-Universität Bochum and PI of the research group “Spaces of Anthropological Knowledge”. She visited TiP group in Spring 2015, and Rachel interviewed her for the Tea in TiP series. Read on to find out more about Estrid’s research interests and activities in Copenhagen.

Rachel: Hi Estrid! Thanks for taking the time to talk to us about your stay at TiP this year. Can you tell me a little about your academic background? 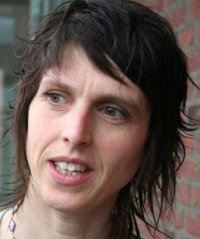 Estrid: I first studied Psychology in Denmark, in Copenhagen actually, and I did my PhD there as well. During an 8 month stay at Lancaster University in 2002 I worked at the Centre for Science Studies where I encountered an academic community different from anything I had known. That was when I thought “I am going to stay with this community”. Once the PhD was finished, I went to the Technical University in Berlin with a Humboldt fellowship, at the Chair of Sociology of Technology. I was there for a year before moving on to European Ethnology for two years at the Humboldt University. Then I came over to Bochum, in a research group that does interdisciplinary science studies. I represent social studies of science in the group, while my colleagues work within literature, media studies and history of science. It was really interesting for me to get to know studies of science beyond the social sciences.

Academically speaking I’ve been in a lot of different places, which is quite typical to STS scholars – I came from psychology, but quickly got out of it. My current position is in cultural psychology and anthropological knowledge. That’s a bit like going back to Psychology but more a science studies position. Like many other STS scholars I’ve turned back and inquire the practices and logics of my own discipline.

Rachel: And does that inform the work you’re doing now?

Estrid: The project I am doing at the moment, with my group of a few PhD students, focuses on computer games. We’re looking at how this phenomenon – this media-technology – is enacted in different ways in different areas of society and in different practices. It’s an attempt to emphasize culture in STS. In STS we’re really good at doing micro studies of technologies and seeing how they work in practice, and that is a great achievement. But technologies seem to work in different ways in different places. Patient journals, for instance, differ considerably from ward to ward, from hospital to hospital, and even more so across other boundaries. There is a lot of generalization of technology going on in STS, even though the whole idea of the field is to approach technology as situated practice. You’ll notice it if you read through abstracts of STS journal papers: Technologies are mentioned but rarely you are provided with information about the specific place and time in the world in which this technology is situated, and what is specific about that embedding. The information is often provided in the journal article, but rarely really given importance for the analysis. I try to contribute a sensitivity to culture to the field by looking at one and the same technology across different practices and inquiring how it’s enacted in different ways and thus also how it becomes different things, and how these are connected, that is how the technology is also ‘the same’.

The technology – or media-technology – we are researching in my group is computer games. That is, computer games in Germany. We divided the sites up to kind of define little ‘islands’ in which computer games are enacted in society. This is to some extend methodologically questionable, but if you want to make a PhD, you need to delimit your field rather clearly. So, one studies the game industry, one studies children and family practices with computer games, one studies science and one studies regulation and legal practices. And each of us asks the same question: how are computer games enacted in this field, what kind of phenomenon is it, how are the people around it enacted, how do they know computer games, and how does each practice enact itself in relation and in exchange with the others? I’m the one studying how media effect studies in Germany conceptualize and enact computer games as potentially harmful to children. The work is mainly done within social psychology, and accordingly I’m doing a kind of social studies of social psychology. Furthermore, I am coordinating the whole thing, drawing connections and comparing the fields. We hope to be able to characterize the cultures of computer games as enacted throughout various different practices, each with their different preferences, and in relation to each other.

I study social psychology by talking to a lot of social psychologists in Germany and by following them, going to conferences in social psychology, and to what they call ‘public dissemination’ of their scientific results. At ITU I was able to write up a paper and discuss it with the colleagues at the STS Salon [ed. The weekly research meeting], on the way in which social psychology media effect scholars use quantifications in their journal papers. Quantification is central to their way of enacting the harmfulness of computer games, which is very different from the computer games enacted in the game industry and in family life.

Rachel: So when you go to social psychology conferences, given your background, do they see you as coming from that field?

Estrid: Not really. I present myself as a science studies scholar rather than as a psychologist, which is also true to their understanding, because the training I had is quite different from theirs. That is about culture as well. Psychology has changed considerably DK since I studied. Back then, social psychology was rather inspired by micro sociology and anthropology. What I do, and what I studied doesn’t count as psychology in Germany. You’d rather find something similar in sociology or what they call European Ethnology. German psychology is very American inspired today, i.e. primarily quantitative. Funny enough, Danish social psychology was known as ‘German inspired’, but that was a different ‘German’, a theoretical psychology of the past. The work I do now is in a way going back and looking at my own discipline, but it is also a quite different discipline to how I have been trained.

Rachel: And how is that paper you presented to us doing now?

Estrid: I incorporated the suggestions from the colleagues at the ITU and just had an academia session and got some very nice comments, [Ed. note: A ‘session’ on academia.edu is where other members of the site give feedback to an uploaded draft or work in progress] so I’ll make a few revisions and then hopefully submit it to a journal rather soon.

Rachel: How was it that you came to write it at TiP and visit us?

Estrid: Through my biographical pathway becoming acquainted with different provinces of STS, I at some point realized that anthropology and anthropological studies in STS are those that I find the most inspiring. Many of the people in TiP have the same inspiration. That is also what made it a very nice place for me to stay. More technically, it was also a matter of getting away from phones ringing, people knocking on your door and all those things you have to attend to on an everyday basis as a university professor, and to get time to write and to think. And the chance to discuss and find inspiration from some of the people I respect most in the STS field was just a gift. Furthermore, being at the ITU in 2015 also meant that I came to plunge into the hype and the discussions on digital methods. I find them very challenging to some of the methodological principles I cherish most in STS, such as the adjustment of method to your object of research. Yet, exactly for the very same reason, they are also just great! They are cheeky and naughty. That is refreshing. But it is also a reason for not taking them too seriously.

Rachel: Did you meet up with other folks while you were in Copenhagen?

Estrid: Yes, I met up with people at the TechnoAnthropology group at Aalborg University Copenhagen and the group at the Tecnucation group at the DPU, which is led by Catherine Hasse. We had some really good discussions. I also enjoyed the NordicSTS conference very much. And of course, I had a great time with old friends!

ITU is in itself a great place to be. But Copenhagen at large is as well. There are lots of STS communities there. I’m a member of the EASST Council, so I know that Denmark is the European country with the most EASST members per capita. STS is everywhere. Being in Copenhagen for me was an opportunity to catch up with people as well as meeting new people at the ITU and beyond. Curiously, while I was in Denmark I had people writing to me from Aarhus and Aalborg, who would like me to comment on stuff, etc. You would think they could just as well write to me in Germany, but somehow this physical proximity actually matters!

As I said, I came because I knew some people who were interesting – I was really happy to get to know other interesting, intelligent, inspiring people. So that was a great outcome of my stay.

Rachel: So having lived abroad for many years, what did you notice about coming back to Copenhagen.

Estrid: I’ve been away for over ten years. Copenhagen has changed considerably and I am myself at a different point in my life than when I was living permanently in Copenhagen. I’ve come here with my children. In that sense it was a new encounter with Copenhagen. We’ve both changed. Coming from Berlin, where I live, I was astonished how well organized Copenhagen is. It’s so easy and nice to get around with all the bike lanes, and the bureaucracy is very smooth – for those considered ‘good visitors’ – but that’s another story. It is a cliché, but it is also true, that Danes are very considerate about user-friendliness and basing society upon trust. It is a bit scary, and there is a lot of social control, but it indeed does make life easy, once you fit in.

Rachel: Well thanks very much Estrid, and we look forward to linking to your paper soon!