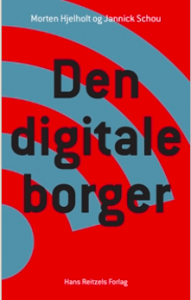 The book (in Danish) asks “What does it mean to be made and to act as a digital citizen?” Drawing upon multiple empirical cases, including studies of citizen service centers in Danish municipalities, Schou and Hjelholt investigate the perspectives and visions of this new figure in the Danish welfare state: The Digital Citizen.

Jannick Schou and Morten Hjelholt are both part of the TiP research project Data as Relation, in particular the sub-project called “At the Margins of Digital Data”. As part of this project, Jannick is currently researching how the digitalization of Danish public-sector institutions may create new forms of digital citizenship. He focuses specifically on citizen service centers (Borgerservice) and the daily practices of municipal welfare state professionals.

The book will be available for purchasing from November 2nd 2017.