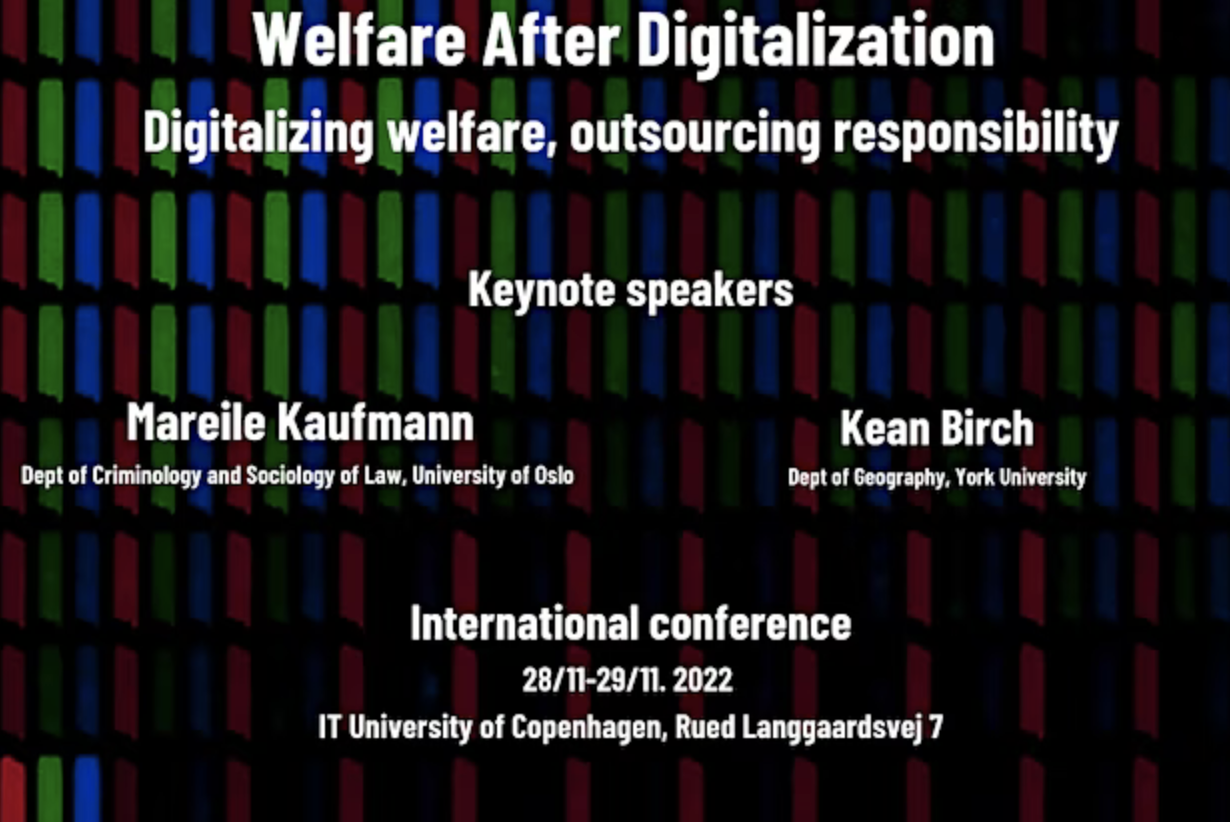 By bringing together decision-makers, interest organizations, NGO’s, citizens, journalists, educators, and researchers the conference Welfare after Digitalization will try to take stock of digitalization’s effect on the public sector.

Numerous TiP-sters will participate in the Welfare After Digitalization conference this week. The goal of the conference is to better understand what welfare has become after the digitalization of four key sectors: education, energy, health care, and law enforcement. The conference is unique in that we strive for dialogue and joint presentations to share knowledge across practices and worlds that are often separate.

As the organizers, Brit Ross Winthereik and Vasilis Galis put it:

During the conference we will take stock of digitalization efforts in the public sector using responsibility as our lens for understanding and intervening in current efforts. Bringing together decision-makers, interest organizations, NGOs, citizens, journalists, educators, and researchers the conference will form a meeting place for exchange of insights and opinions regarding the disparate intentions and varied effects of digitalizing welfare. The goal is to better understand what welfare has become now, after the digitalization of key functions have taken place. In particular, we are interested in the digitalization of four key welfare sectors: education, energy, health care, and law enforcement, but presentations of studies or interventions beyond these sectors are welcome, too (e.g. news media, child care, protection of labor rights, migration and asylum management etc.).

We propose to focus on the outsourcing of responsibility to address a salient feature following public sector digitalization: Public sector digitalization in most cases involves private businesses, either as in-house consultants or as owners of a platform. This differs from traditional forms of Public-Private-Partnerships as an important element is to delegate responsibility to new actors, including citizens. This tendency raises questions about ownership, both with respect to the provided expertise or technical infrastructure as well as in relation to the data that is created, transported, and stored. What happens when the responsibility for welfare services is outsourced? We invite case studies, historical perspectives, first-hand experiences, ethnographies, political manifestos, digital methods and more.

We invite presenters to share research, experiences, and politics individually or as a group. This way we wish to make space for conversations and exchange insights between people who occupy very different positions in relation to digitalization programs and their effects.

The conference is supported by the Velux Fonden

When PhD students are at the right stage of their studies, they resurrect the longstanding institution of the STS Reading Group. Previous seasons of the Reading Group can be found here