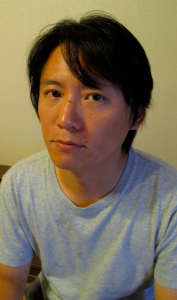 Atsuro Morita works as an Associate  Professor of Anthropology at Osaka University, in the Faculty of Human Sciences. He is visiting ITU for 12 months as part of the Environmental Infrastructures research project, which is convened between faculty at ITU, Copenhagen University and the host institution, Osaka University.

Rachel Douglas-Jones: Thanks for finding the time for this Atsuro, and welcome. Can you begin by telling us how the visit came about?

Atsuro Morita: In Japan, the academic year runs from April to March. I completed my teaching in the first half of the year, and will do next year’s in the second half. So it is my colleagues in Osaka and the Environmental Infrastructures fund that have made the visit possible by helping redistribute administrative duties and supporting the research time.

Rachel: Can you give me an overview of what you will be working on while you are here?

Atsuro: My first priority is finishing off the publications from the Environmental Infrastructures project . I presented one to you [at the STS Salon] and Casper Bruun Jensen, Penny Harvey and I are working on a Routledge  Companion Infrastructure and Social Complexity. We have also just put out a special issue of ETHOS, from EASA 2014 in Tallinn. In terms of content, most of my work in this project is about the infrastructure of deltas and water issues.

Rachel: Yes, I’ve noticed the theme! How did you come to be working on issues of water?

Atsuro: I’ve been interested in infrastructure for some time. I first became interested when I was writing my first book, which was practically my PhD thesis, and that was about small scale mechanical engineering in Thailand. One of my focuses was networks of second hand parts between Thailand and Japan, and in the course of my research I came across very extensive Japanese Government effort to trace used cars and car parts. This turned into a chapter of my book, on the Japan-Thai second hand parts trade. That was really my first encounter with infrastructure, and at the time it was mostly just Susan Leigh Star writing about it for the conceptual side. So after studying mechanical engineering I wanted to study some infrastructural technology particular to Thailand and irrigation is an obvious one. It is connected with the King and Government there, so it’s quite interesting. Also, during my stay in Thailand there was rioting in the central region over flooding, and I was always watching TV coverage about flooding here and there and how people in rural areas were adapting to annual flooding, whereas industries and Bangkok especially are super worried about damage. I realised flood irrigation is a very big thing and the technologies themselves are very interesting. Irrigation is system to deliver water but also this same networks works as a barrier to protect Bangkok from flooding. This contradiction interested me. I started interviewing irrigation engineers, and along the way I discovered a large Japan-Thai project on hydrology. It turned out Thailand is one of the most important developing countries in global hydrological observation. It also has an extensive collaboration with Japanese hydrologists. So I became interested, and have been working with hydrologists for 3-4 years now.

Rachel: So how does that work you’ve been doing feed into the new grant you just got? (Congratulations by the way!)

Atsuro: The new  grant is collaborative funding from 4 european countries : Netherlands, Germany France and the UK. I don’t know how it came about, but these four countries somehow have a coordinated funding scheme and Japan just joined. We created a consortium under the lead institution, UCL, but each country has PIs. The project is called “Deltas’ Dealing with Uncertainty: Multiple Practices and Knowledges in Delta Governance”.

It is good because we are close to the end of Environmental Infrastructures, and my group is trying to extend our research in this area. Aside from this we are also applying another project called “Assemblages of the Future”. In this project we are going to make the scope a bit broader, particularly given the emerging Anthropocene literatures. We are not engaging it directly, but in the course of our project on infrastructures we found that infrastructure is quite future oriented, so we became very interested in how this imagined future or simulated future is becoming part of existing infrastructures and practices. While we were developing new applications, we disagreed about how much to engage the Anthropocene literature. At first I was very critical, because of the geological imagination – it looks very modernist, given the historical relationship between geology and Western cosmology. It seemed a bit too euro-centric. I mean, still now in Japan, Thailand and probably China, Anthropocene is not a common term. So in a sense I first became interested in this “Anthropocene” because of the imbalance: in European and American circles people, especially social scientists, are very much interested, but in Japan and Thailand I haven’t really heard much discussion.

Rachel: Are other things more important?

Atsuro. Climate change is pretty much there, but particularly in Thailand, they take climate change problems to be very much about north-south relations and colonialism. In Japan, climate change have attracted attention from anthropologists too but their engagement looks a bit different from that of the Anthropocene. We have traditions of ecological anthropology, and schools of anthropology which are more closely linked to primatology and ecology. But these people are not like environmental humanists in the sense of what we are doing. So I see what we are doing as creating a new space, with new STS based ecological environmental anthropology, and trying to have conversations with these existing people who are often more natural science.

Rachel: Can you say something more about the connections between STS and Anthropology in Japan?

Atsuro : Yes! I recently joined a AAA  panel on STS and anthropology and wrote a small piece on this Japanese relation [ed. note Published here]. So in Japan, the field of STS is pretty much science policy. But anthropology developed its own interest in science and technology, which stemmed from practice theory and ecological anthropology. So Japan had a strong tradition in theory of practice which had a Marxist influence because they are v interested in technologies and adaptation. Since these processes are human practices, they have their own kind of materialistic theory of practice and at some point, a Marxist made the move to integrate ecological anthropology with broader social anthropology. My generation was practically trained by these people, so I actually started with practice theory and because technology is so central in Japanese practice theory I got interested in STS.

Rachel: How has the field changed?

Atsuro : The application of Strathernian ideas, by people like Hiro Miyazaki and Annelise Riles, in bureaucratic and legal practices opened up huge possibilities for Japanese anthropologists. It meant there was new scope to study organisations, bureaucracy, and relate these different things back to classic anthropological topics. That’s a big thing. Before that there was a difficulty in relating classical anthropological interests. For example, when i was studying, doing my PhD, there was a growing gap between studies of rituals, magic and so on, and contemporary issues. Her work, moving back and forth between the UK and Melanesian material, made it possible to connect these two groups of people and interests. and that’s very beneficial to develop new kinds of thought and also re-invent solidarity in anthropology.

Rachel Why was that?

Atsuro : The method of comparison and her reflexivity about comparison is really central to me. I mean, comparison was pretty much a dead word in the 1990s and the Writing Culture people were interested in themselves or themselves as writers, it was a very closed world. The 1990s gave a sense of fragmentation, with no theoretical center so Japanese anthropologist were dissolving into area studies. It was a big concern. MS’s work was quite strong in that context to get rid of worries and recreate connections. The important thing is she showed it is possible and many people got inspiration there.

Speaking of inspiration, what will you be doing in the coming project?

Atsuro : In the new project, I will be focusing on the circulation of hydrological models among deltas. I’ll start with Chao Phraya delta, but I have been working in Thailand for quite some time so I would like to do something new, My plan is to do more STS ethnography and I find this hydrological model world very interesting. This is part of the reason for my stay here. Denmark has one of the most well used hydrological models – there’s public company, it’s half state half private research, and it developed a world standard hydrological model widely used, including in Japan and Thailand. I came across this during my fieldwork in Thailand and basically every Thai water management agency uses this model.

Rachel. Wow, so its computational model?

Atsuro It’s a complex simulation model, which models how water moves. It’s a network model so if you put in river network information and rainfall as well as some local parameters its simulates water river flow. Virtually. This is one of the few standardized softwares

Rachel: How has it come to be so widely adopted?

Atsuro It’s used everywhere, but the interesting thing is hydrologists, their main work is developing hydrological models. So every hydrologist has his or her own model. This means there are so many tailor made models for particular river basins, and no model matches up with the next. It doesn’t have compatibility. It’s quite awkward for people in water management. So the Danish standardized model is extremely popular among them. I need to look at this more closely and how this Danish institute created a standardised model, friendly to water managers, people operating sluice gates, dams and so on.

Atsuro : Well, with the standardised software, you find it in practically every kind of river basin, and the Danish company provide good user support so it’s very easy for water management people. And here is another point of interest, the tensions that arise between water managers and scientists. In my observations of collaborations between hydrologists and water management people, the bureaucrats are always complaining that hydrologists develop their own models which can’t be used in other places, because they have too many specifications. I think this is interesting, and I am also interested in this model, the Danish one, and how they developed it.

Rachel: So actually Denmark is a field site?

Atsuro : Yes! After I finish these writing projects.

Rachel: That is going to be great fun! So to close, you could give us some of your early experiences of Denmark?

Atsuro : I’ve been here only two months, and in many ways Denmark is very very different from Japan and Thailand. I am very interested in CPR numbers! It is a very very surprising thing, and this kind of integration of all information systems. The fact it is possible is really unbelievable. So, I think from a technological STS anthropology viewpoint, Denmark is a really interesting place. Japan is pretty much paper document based: you have to go to an office and fill out ten different documents to get things done. But here it’s a kind of this CPR number coordinates everything, which makes the bureaucratic infrastructure so different. I am also surprised at the optimistic attitude of danish people about the centralised system. Japan used to be fascist, so peoples’ immediate reaction to this kind of control is extremely negative. The combination is unthinkable in Japan, so I am interested in the thinkability of it here.